Afternoon Tea at The Connaught Hotel

Ah, The Connaught. One of my absolute favourites in the afternoon tea world. I had my last social gathering as an unmarried woman there and a couple of weeks ago it was the venue for my third and ultimate afternoon tea in four days.

Having just arrived by train from Bath my friend C and I met up with the charming G&A in the surprisingly warm Espelette conservatory. It was a 'hot hot day' as Enid Blyton would have called it - it truly was. Our waiters were charming, and quickly filled our table with three-tier stands full of stylishly reinvented sandwiches plus a tea pot for each of us. Sandwiches are generally among my favourites at afternoon tea, and we certainly had some very tasty ones (but I would personally have preferred more of the traditional ones instead of quirky mini-focaccias and brioches). Their finger sandwiches with a hint of pineapple were particularly good, and we were offered a second round of them without even having to look in the waiter's direction. The scones arrived, and they were exceedingly good. These were served with home-made jams from France, which we chose from a dinky little selection on the menu, and the clotted cream was generously adorned with fresh berries. Then came the pastries which were like miniature desserts and, almost overwhelmingly (we were by this stage struggling a bit in the heat), a selection of beautifully made sponge cakes.

It feels like a crime not to try everything when it is so beautifully made and presented, but there was such an abundance that we simply couldn't eat everything. This is where the Connaught service really shows; our waiter quickly transferred our leftovers to smart little pastry boxes and handed them to us as we left. 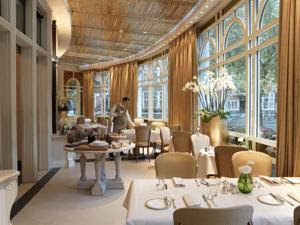 Tea list: A good selection of black and non-fermented teas.

Atmosphere: Stylish and very cosseted.
Posted by Nordic Soul at 11:48