Last weekend, having gawped at the hulking great HMS Ocean in Greenwich and squinted at the underwhelming Olympic Park in Stratford, we went to The Soho Hotel for a bit of sustenance with a good friend. Despite having had a full lunch a few hours earlier we valiantly ordered the Great British Afternoon Tea and sprawled on a hot pink sofa for a few hours.

Verdict: Very good. Perhaps not so much for the food itself, which was good, but for the relaxing atmosphere and attentive waiter. We were served miniature versions of welsh rarebit, quiche, an egg-mayonnaise roll and asparagus rolled in ham. Not bad at all, though I personally love traditional finger sandwiches. The scones were handsomely sized and crumbly, served with clotted cream (of course) and raspberry conserve. Hm.. by the time we reached the cakes we were struggling, it took us hours to work our way through everything. Which is of course perfectly normal. Gallons of tea later we collected our coats to leave and were handed a neat little parcel of cakes left over. Now that is service.

Don't go to The Soho Hotel if you want traditional sandwiches and mouthwatering scones with (yes, I admit I prefer it) strawberry jam. But if you've been out for a walk and don't look chic yet you'd like to relax in what feels like someone's large and fabulously eccentric drawing room where you will be well fed and looked after - this is your place. 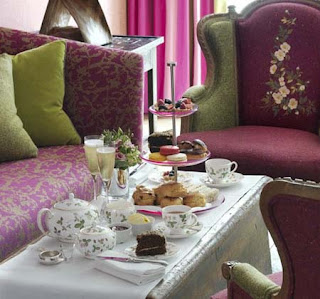