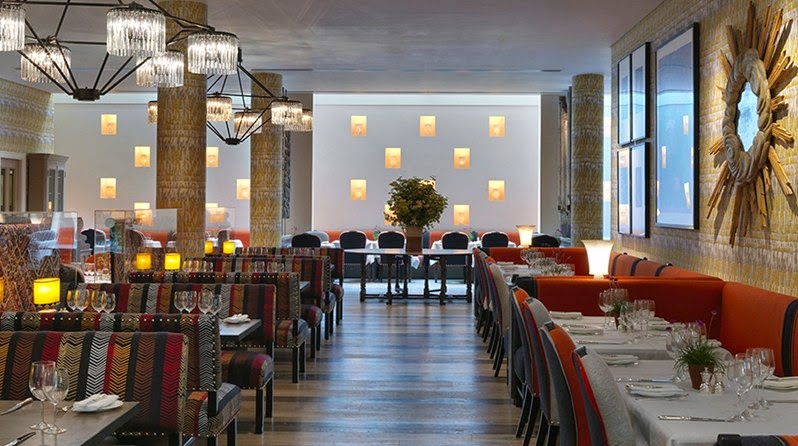 Last weekend The Quarterly Afternoon Tea Club struck again, after a 6-month hiatus (waistlines had to shrink before we could indulge again...). The venue was Ham Yard in Soho, a recently opened hotel by the very stylishly eclectic Firmdale people. Oh, how I love to discover all the details in a Firmdale interior!

Anyhow, it was my birthday, and we settled in for a late-afternoon treat. We were very comfortably seated (a fact my beloved consort commented on several times: "I love a high-backed sofa", a good start) in the main restaurant area, surrounded by a lot of details in orange. I discovered that not only is orange a warm colour, it helpfully stimulates the appetite.

Our waitress took us through the afternoon tea menu (it's funny how they do that - it seems so formal, but it does create a lot of anticipation) which included an avocado mousse with lobster (this was very very good) and a lobster thermidor tartlet (delicious), deep-fried macaroni-cheese cubes (a bit 'bof', to be honest) and two very tasty sandwiches of the classic kind, to balance everything: Egg & Cress and Ham & Tomato. I sometimes think the skill lies in making the classic sandwiches memorable, and these were.

On to the scones, led by my friend who doesn't like anything sweet (yes, that is what she says). These were small and fluffy, plain and raisin, and to be honest I often think small scones are the best, it helps you maintain that dainty look whilst scoffing something incredibly rich. I always prefer strawberry jam, but there was another jam too, possibly blackcurrant, which was left untouched.

Then the sweets, which were really quite sophisticated. The dark chocolate & salted caramel pot was unanimously loved. I tried a chou filled with lemon-scented whipped cream, which was lovely but too large and too rich for me and slowed me down considerably. After that a feeble attempt at a strawberry macaroon (again, rather large), but I had to give up. The rest is a blur...

The service was a bit erratic unfortunately, but redeemed by our chief waitress, who was impeccable. She encouraged me to try Assam tea which I brewed in a one-cup glass pot at the table, to be replenished three times. And it was excellent. But my husband waited too long for his second round of savouries, and so did my friends when they ordered more tea. However, afternoon tea at Ham Yard is a mere £18. Where else would one get such a delicious afternoon tea at that price, including lobster? Nowhere, I should think.

To add to this, Ham Yard is a thourougly great venue, large and superbly decorated, with a great atmosphere. We rounded off the evening with a few hours in the bar, which was equally good.

Would we go again? Well, their afternoon tea menu changes every week, so we will have to, won't we? 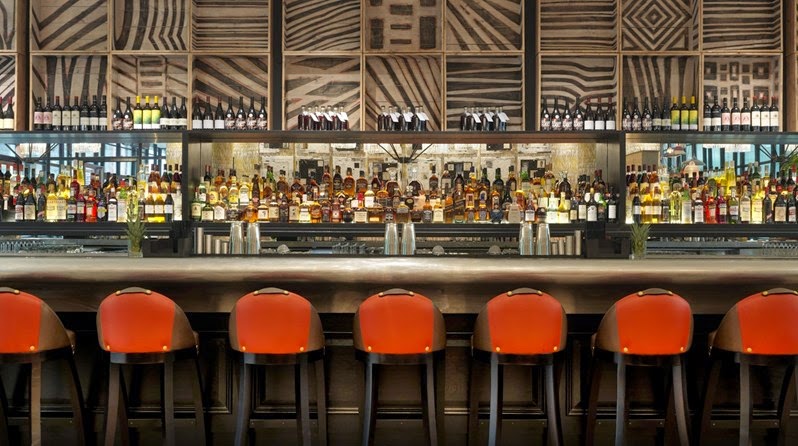